The Soochow machinery was commended by the State Energy Bureau 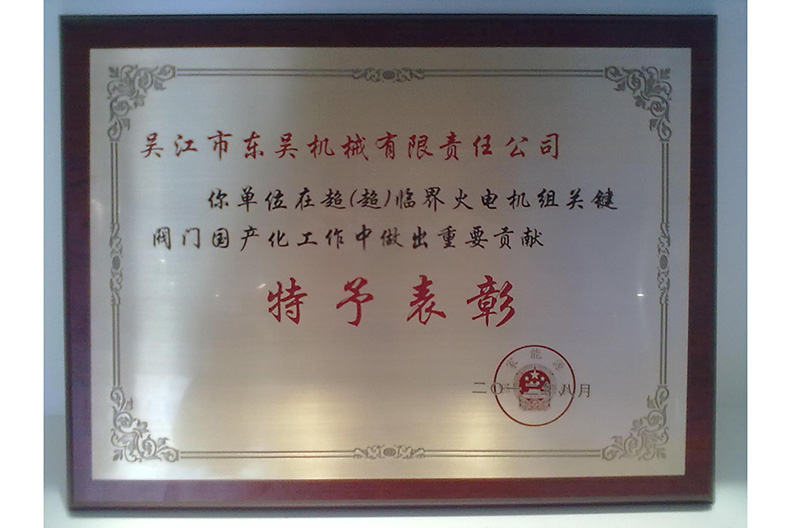 Super (super) critical thermal power unit has significant energy saving and environment improvement effect. It has low coal consumption, good environmental protection performance and high technical content. It is the development direction of thermal power equipment. At present, they have been widely studied and applied in developed countries, but in our country, because of the late start, the high-end valves in this type of unit basically rely on import, according to statistics, a 1000MW super (super) critical unit has more than 500 high-end valves, only 10% from the domestic purchase.

In view of the current situation, under the promotion of the State Energy Bureau, in April last year, 17 domestic valve manufacturers carried out domestic flags to advance to the high-end thermal power valves. Wujiang Dong Wu machinery limited liability company undertook the localization of the import and export safety valve of the super heater unit. On 7-8 January 2012, the National Energy Bureau and the China Valve Association held the product identification meeting in Dalian. The super (super) critical thermal power unit safety valve products of the Soochow machinery were approved by the experts and passed the appraisal. In September 2, 2012, the State Energy Bureau awarded the honorary certificate issued by the State Energy Bureau at the National Conference on the localization of key valves for supercritical (super) thermal power units held in Beijing. At the same time, Wujiang's Soochow machinery has become one of the third key valves to start the ultra supercritical power plant.